MAGNY-COURS: McLaren team principal Ron Dennis says that the team are looking forward to again demonstrating their pace when Formula One moves to Silverstone for the British Grand Prix this weekend.

Title challenger Kimi Raikkonen showed that he would be one of the major threats to leader Fernando Alonso after he took second place behind the Spaniard at Magny-Cours in France on Sunday.

The young Finn has scored more points than early-season favourite Alonso over the last six races and performed well to secure second here despite an engine replacement meaning that he was demoted to 13th on the grid.

Dennis is in optimistic mood ahead of this weekend's race at Silverstone and believes that the McLaren team can again put in a powerful performance.

“I am happy with our pace, clearly the car has the speed to win,” said Dennis.

“In reality we have a lot of speed and I am satisfied we did the best out of a difficult situation.

“The outcome is good, it's only two points we have slipped behind and there is a lot of races to go so we just focus on Silverstone.”

“We have the pace, that's the frustration. I am looking forward to (this) weekend, we were extremely strong in testing there.

“Right now we should be just taking the positives out of the day which is that we have tremendous pace.”

McLaren were disappointed that Raikkonen, who qualified in third for the French Grand Prix, was penalised 10 grid places after he suffered a blown engine during practice.

Dennis says that the team will now look to help Montoya up the grid as McLaren look to show their dominance in the second half of the year.

“We would have liked to have won this time but we are looking forward to Silverstone - it should be a great race,” said the McLaren team chief.

“We go there with at least the understanding that we have the speed to win. Now we have to concentrate on giving Juan Pablo the best chance to pull himself up the grid and just do our best.

“It's the first time Juan Pablo hasn't finished a race and it would have been hugely advantageous for us if he had finished third.” – AFP 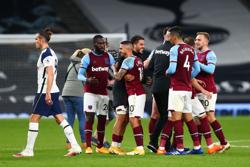