HOUSTON: Andre Agassi claimed an explosive 7-6, 3-6, 6-4 win over David Nalbandian on Thursday, reaching the semi-finals of the ATP Masters Cup and a step closer to the title he last held 13 years ago.

Agassi, who has not claimed the Masters since his first visit to the year-end finale in 1990, will next face Germany's Rainer Schuettler today in a rematch of the Australian Open final for a chance to play for season's final prize.

The other semi-final will pit Red Group leader Wimbledon champion Roger Federer against either world number one Andy Roddick or Argentine Guillermo Coria to decide the last berth.

With second place in the Blue Group standings and a spot in the final four of the US$3.65mil year-end event riding on the outcome, tempers flared on a chilly stadium court with an enraged Nalbandian accusing tournament officials of favouring Americans with their calls.

That outburst brought ATP supervisor Mark Darby onto the court, who tried to calm the fiery Argentine.

Much of Nalbandian's anger was directed at tournament owner and promoter Jim McIngvale, who invested US$27mil in this event but has come under criticism in some corners for his rampant support of American players from his front row seat behind the baseline.

“They all think the same,” Nalbandian said when asked how the players felt about McIngvale's cheerleading. “I think it's a lack of respect towards the players.”

By the time Nalbandian returned to action he had regained his composure, registering the early break on way to a 3-0 lead and levelling the match at one-set all.

Playing in his first event since a semi-final loss to Spain's Juan Carlos Ferrero at the US Open, the 33-year-old Agassi has shaken off a bit more of the rust with each match – all three-set marathons – and in the third set the Australian Open champion sparkled, once again using his experience and iron will to clinch a place in his sixth year-end semi-final. 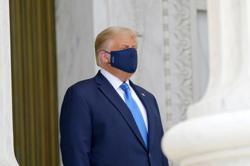