So young and already football hooligans

IPOH: It was shameful and an absolute disgrace. When Terengganu supporters and officials swarmed the pitch to attack the Kuala Lumpur players during the national schools (MSSM) Under-18 football final on Thursday, it was also a sad day for the sport.

And action has to be taken against both the boys who invaded the pitch and team officials, who instigated the invasion.

It is an even bigger shame that the “thugs,” who sat beside Terengganu’s reserve bench, were actually from their Under-15 squad. What an early start for the worse kind of football.

Having said that, it would be unfair to blame the entire team for the chaos when only a few individuals interrupted what would have been a hard-fought final.

The two teams were even at 1-1 after regulation time and trouble started two minutes into extra time following a foul by Kuala Lumpur’s Mior Mohd Hadzlan on an opponent near the Terengganu bench.

All hell broke loose as supporters sitting next to the bench ran onto the pitch and chased after Mior.

Terengganu officials were already furious as they were then down to seven players, with four players sacked during regulation time.

Tempers were further frayed when Kuala Lumpur refused to decide the issue on a penalty shoot-out and insisted on extra-time.

The MSSM technical committee, who had decided to do away with the 10-minute extra time earlier, did an about-turn and allowed Kuala Lumpur’s protest.

The final was not the only explosive game in the week-long tournament. Terengganu's neighbours, Kelantan, were involved in another free-for-all in their opening match with Penang. Two players from the East Coast side were being sent home overnight although Kelantan won 1-0.

The Education Ministry and the Malaysian Schools Sports Council (MSSM) have to act fast.

It is bad enough that such things should happen at senior level, as evidenced by the pitch invasion during the FA Cup semi-final at Likas Stadium in Sabah on May 18. When children who are barely into their teens turn hooligans, it is time to throw the book at them.

A full inquiry is needed and the officials, who are teachers and should be setting good examples for the boys, will have to face the music.

Sadly, though, Terengganu were actually a delight to watch. Their teamwork and individual skills displayed by Manaf Mamat, Mohd Kaimi Zudir, Faizal Mansor and Sham Shahril Gulam augur well for the state.

Kaimi even walked away with the Best Player award while Shabine Alawi Ramli was named the Best Goalkeeper.

For Kuala Lumpur, the 2-1 victory in extra-time ended a 17-year-wait for the title. 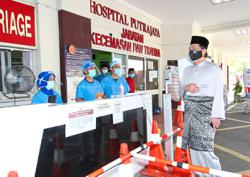