Mohamed Noor among eight under probe for match-fixing 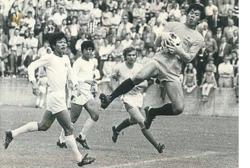 SINGAPORE: Eight Singapore footballers, including a member of the national team, are being investigated for alleged match-fixing and betting on local league matches, officials said yesterday.

Mohamed Noor Ali, a regular In Singapore's national squad, was among the players being investigated by the Corrupt Practices Investigation Bureau, Football Association of Singapore spokesman Quah Kim Song said.

The general public can bet on the outcome of matches in Singapore's local S-League, though players and officials are banned from doing so and can face jail terms if found guilty of gambling or match-fixing.

In 2001, German player Lutz Pfannenstiel and Australian Mirko Jurilj were jailed for five months for match-fixing in Singapore.

Kim Song said the football association was designing posters to be placed in stadiums and locker rooms to remind players they were not allowed to gamble.

“As human beings, we tend to forget sometimes, so it is better to have these posters to remind the players not to bet on matches,'' Kim Song said.

The Asian Football Confederation yesterday praised Singapore anti-corruption officials for being vigilant against bribery and corruption. It urged other nations to do more to stop illegal betting.

“AFC is fully aware that there is rampant gambling and betting on foreign football seen on television,'' AFC general-secretary Peter Velappan said in a statement.

“It is important for football and police authorities to remain vigilant to protect football from being taken over by gambling syndicates.''

Velappan said the AFC has urged football associations in Asia to co-operate with police and anti-corruption authorities, educate players and officials against corrupt practices, and impose harsh penalties on offenders.

Singapore's local league begins in three weeks with China's Sinchi team entering the competition – the first from outside the city-state to play here. –AP