INDIANAPOLIS (Reuters) - Having joined the Indianapolis 500's most exclusive club of four-time champions last year, Helio Castroneves will try to move into a league of his own on Sunday by becoming the first to win the "Greatest Spectacle in Racing" on five occasions.

But it took 12 years to bag number four and at 46-years-old the window is closing for the charismatic Brazilian to make Brickyard history.

"Am I going to fight for it? Absolutely.

"Is it going to happen, we are going to see on Sunday.

While it is nice to dream, the reality is Castroneves will start 27th - near the back of the 33-car field in a car that has not shown it is capable of running up front.

Perhaps the biggest roadblock in his drive-for-five is a powerhouse Chip Ganassi Racing outfit which will have five drivers near the front led by Scott Dixon, snatching pole with a record speed of 234 mph.

Starting alongside the New Zealander will be his young Spanish team mate Alex Palou, runner-up at last year's 500, while Row Two will have two more Ganassi employees in Swede Marcus Ericsson and Brazilian Tony Kanaan.

Not far back in row four is Jimmie Johnson, the seven-time NASCAR Cup champion seen as a dark horse pick despite making his Indy 500 debut.

"I think we have a good mix of some veterans and also some younger guys," said Dixon, a six-time IndyCar champion who sits third on the all-time win list with 51.

"The team Chip and everybody has put together is very unselfish but also have the common goal to just want to win.

"That's hard to come by and keep that as an even keel. Right now is probably is one of the times where I have seen the whole team all smiling.

"That's hard to achieve with two or three cars, it's difficult with five - really tough."

IndyCar has seen a pack of hard-charging newcomers emerge over the last two seasons but when it comes to the Indy 500 the old guard has been less willing to pass the torch.

Palou, at 25-years-old is the reigning drivers champion while Arrow McLaren's Pato O'Ward and Andretti Autosports's Colton Herta all posted multiple wins last season and have attracted interest from Formula One.

But at the notorious Brickyard experience, bravery and smarts count and there will be plenty of it on Sunday's grid.

Polesitter Dixon is 41 while team mate Johnson is 46 as is Colombian Juan Pablo Montoya. Kanaan and Castroneves are 47.

Dixon, Kanaan, Montoya and Castroneves all have at least one Indy 500 victory on their resumes while Johnson has won the Daytona 500 twice.

Frenchman Romain Grosjean, 36, brings a different type of experience to his first Indy 500 having made 179 Formula One starts before moving to IndyCar.

"I feel experience is an advantage," said Castroneves. "Still going to be very difficult but I feel we can do it." 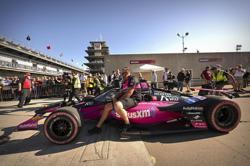