LONDON (Reuters) - Aston Martin say they can give Sebastian Vettel what he wants this season and get the best out of the four times Formula One world champion as he starts afresh after recent struggles at Ferrari.

The 33-year-old German last won in Singapore in 2019, with Ferrari well off the pace last year in their worst campaign since 1980.

Vettel also made some glaring errors over the last two years, however, and lost out to much younger Monegasque team mate Charles Leclerc on wins, poles, podiums and points.

Some critics have suggested he is on the slide, his best years behind him, but it was all smiles at Wednesday's launch of the new Aston Martin F1 car and team bosses were confident Vettel could deliver.

Technical director Andrew Green told reporters the Silverstone-based team, rebranded from Racing Point, would adapt to the German's way of working and could tune the car's characteristics to suit his requirements.

"He does have his own personal driving style but that's no different to the driving styles that we've seen from other drivers," he said.

"And I'd say not as extreme as the driver he's replacing (Mexican Sergio Perez who is now at Red Bull), who had a very extreme driving style that was very difficult to get right at all tracks."

Green said the team had been working for the past month in the simulator to tune the car to Vettel's liking and he seemed happy with the direction taken.

"I think we're going to get the best out of Seb, I really do," he added.

"He's at the top of his career. He's there. If we can't extract the best out of Seb, then it's our fault not his. I'm confident we can get Seb in the right place." 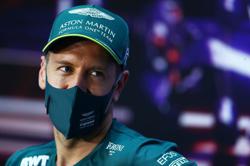