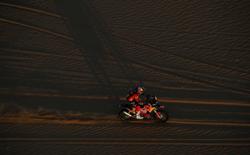 (Reuters) - French veteran Stephane Peterhansel celebrated a record-extending 14th Dakar Rally victory on Friday, and his eighth in the car category, after a gruelling two weeks in the Saudi Arabian deserts.

The 55-year-old X-Raid Mini JCW driver, nicknamed "Mr Dakar" for his unprecedented success, first won the endurance event on a motorcycle in 1991 and switched to cars after five more wins on two wheels.

Argentine Kevin Benavides, riding a Honda, became the first South American to win the motorcycle category after the 12th and final stage that ended in Jeddah.

The annual rally started in 1978 as a race from Paris to the Senegalese capital, Dakar, but moved from Africa for safety reasons in 2009. It is now held entirely in Saudi Arabia after a stint in South America.

This year was the 43rd staging of the event.

Friday's finish was clouded by news of the death of French amateur rider Pierre Cherpin who had been in an induced coma since he crashed on the seventh stage.

The 52-year-old amateur was the first fatality of this year's event. Two motorcycle riders died on the Dakar last January.

Peterhansel, who had led since the second stage but won only one of the 12, finished 14 minutes and 51 seconds ahead of Qatar's Nasser Al-Attiyah, a three times Dakar winner, in a Toyota.

In the motorcycle class, 2020 champion Ricky Brabec of the United States won the final stage to finish runner-up to team mate Benavides and complete Honda's first one-two Dakar finish since 1987.

"On stage five I was worried, because I crashed so fast and hit my head and my ankle and felt a lot of pain. On that day I said maybe the Dakar is finished for me. But I continued pushing," said Benavides.

"I still have some pain, but at the moment I am more happy than in pain."

Manuel Andujar made it an Argentine double with victory in the quadbike class.

(Reporting by Alan Baldwin in London; Editing by Robert Birsel and Alison Williams) 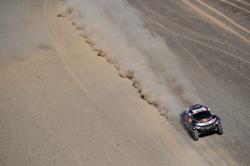