MANAMA (Reuters) - Lewis Hamilton led criticism of the tyres Formula One supplier Pirelli plans to introduce in 2021 after drivers had a chance to try them out during Friday's practice sessions for the Bahrain Grand Prix.

"I’m trying my hardest not to say anything," said the Briton, who equalled Michael Schumacher's record haul of seven world titles at the last race in Turkey.

"They’ve had two years now to develop a better tyre," he told a videoconference.

"From a driver point of view we’re working with brands and partners who are at the forefront of technology, elevating and moving forwards and if you’re going back after two years of development, I don’t know what’s happening.

"If that’s all they’ve got and that’s the best that they can do, which it clearly is, then we’ll just be better just to stay with this tyre," added the 35-year-old, who ended the day fastest for Mercedes.

Pirelli has carried over the tyres it used last year into the 2020 season.

The Italian company wants to introduce a tyre for next season that is stronger, featuring the same compound but different construction.

“Every time you propose a new tyre, there are some criticisms, there is a change in balance,” said Pirelli’s F1 boss Mario Isola.

“I’m sure they (the teams) will find a way to balance the car and extract performance from the 2021 tyres.”

Friday practice in Bahrain was the second time teams and drivers have had a chance to evaluate prototypes of the new tyres having also run different versions of them during practice for last month's Portuguese Grand Prix at the Portimao track.

Hamilton, who said the new tyres were three kilos heavier and a second a lap slower, was equally unimpressed after running them at Portimao.

"They were not a step forward," said the German after Bahrain practice. "Probably worth a shot, but I hope we don't see these tyres again. 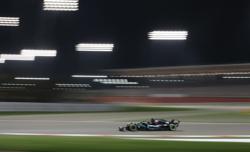