Pahang had led through a double strike from Danish Irfan Saufi who converted penalty corners in the 40th and 52nd minutes.

Fareez Zafran Zunaimi scored a field goal for Perak in the 49th and Rahuul struck in the final minute to steal a point to help Perak stay top of Group A with seven points.

Pahang, who had beaten Kuala Lumpur 2-0 and drew with Kelantan 1-1 in their earlier matches, are in contention for a place in the semi-finals with five points in third spot.

KL, after their defeat to Pahang, bounced back in style to beat Terengganu 4-1 to keep their semi-final hopes alive.

Ahmad Haziq Hamzah opened accounts for KL after scoring a field goal in the 13th minute while G. Dheeressh made it 2-0 with another field attempt in the 30th minute.

Airil Abdul Razak made it 4-0 after converting two penalty corners (45th and 54th minutes) before Terengganu hit a consolation goal through Mohd Yazran Saifuddin in the 57th minute.

KL are in second spot with six points after yesterday’s win. 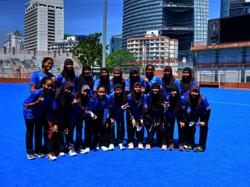