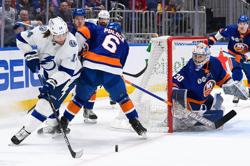 May 22, 2022; Tampa, Florida, USA; Tampa Bay Lightning right wing Nikita Kucherov (86) shoots into an empty net for a goal against the Florida Panthers in the third period in game three of the second round of the 2022 Stanley Cup Playoffs at Amalie Arena. Mandatory Credit: Nathan Ray Seebeck-USA TODAY Sports

Nikita Kucherov had a goal and three assists to help the Tampa Bay Lightning beat the visiting Florida Panthers 5-1 in Game 3 of their second-round playoff series on Sunday and move within one win of advancing to the Eastern Conference Finals for a third straight season.

Steven Stamkos scored two goals for Tampa Bay, and Corey Perry and Erik Cernak also scored. Andrei Vasilevskiy made 34 saves for the Lightning, the two-time defending Stanley Cup champions who will bring a 3-0 lead into Game 4 on Monday night in Tampa. 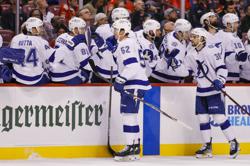 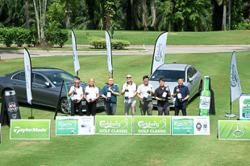