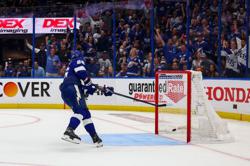 (Reuters) - The Tampa Bay Lightning enter the NHL playoffs chasing a rare three-peat as Stanley Cup champions while the Florida Panthers hope to put the finishing touches on what has been a dominant season.

The playoffs mark the most exciting time of year for hockey fans, a gruelling two-month tournament featuring 16 teams and four best-of-seven rounds that awards those on the winning team the right to have their names etched onto the silver trophy.