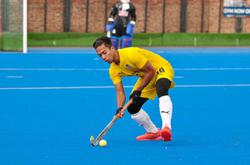 PETALING JAYA: Striker Amirul Haniff Mamat has lighted up the Junior Hockey World Cup with his energetic performances but he knows only goals count at the end of the day.

Amirul revealed that he idolised Tengku Ahmad since he started playing the game and tries to imitate him which certainly have had a big impact on their matches thus far.

But despite the accolades, Amirul has yet to score. And he is optimistic that he will break his duck in the big match, against France in quarter-finals on Wednesday.

“After three group matches, my game is definitely getting better. It’s just a matter of time before I score and I’m confident of doing that against France.

“They are a strong side as you can see by the number of goals they’ve scored.

“I’m pretty sure through training and video sessions we can come up with a plan to counter them.

“We still have ample time to see what needs to be fixed, especially in attack.

“So far, we’ve scored six penalty corners and a field goal. We will certainly be emphasising more on field-goal conversion during the sessions.”

When asked how he honed his game, Amirul said it’s through a lot of hard work during and after training.

He also practises on his own such as dribbling in small spaces.

“It has helped my game, that’s for sure. Moving around in tight areas makes you react faster and also dribble well. But it’s still a work in progress.

“For example, I need to work on my ball control when under pressure. Coach Wallace (Tan) constantly tells me to be calm and be patient.

“Plus, when I’m around the D (the semi-circular area around the goal), I have to think fast to find ways to score and also look for the next best option... that is my teammates who are in a better goalscoring position.” 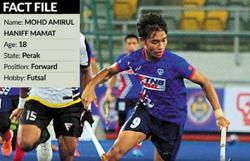