25 teams to vie for MJHL crown

KUALA LUMPUR: Despite the Covid-19 pandemic, 25 teams have confirmed their participation for the 2021 Malaysian Junior Hockey League (MJHL) to be held from Nov 25 to Jan 2, 2022.

The teams playing in the two divisions will be decided via a draw to be held later.

“The number of teams for each division was decided by MHC Competitions Committee at a meeting earlier. The committee also appointed Vinod Anand of the Kuala Lumpur Hockey Association as tournament director and he will be aided by two assistants,” said Anil Jeet.

He also said that fully vaccinated individuals would be allowed to watch matches in the stadiums if the MHC get the green light from the authorities.

“Football (matches) already have spectators, other activities too. If the government, the MKN (National Security Council), KBS (Youth and Sports Ministry) and NSC (National Sports Council) give us the green light, we will allow it but with physical distancing in place and it will be monitored,” he said.

Meanwhile, Anil Jeet also announced the appointment of Anant Kaur of the Selangor Hockey Association as tournament director for the 2021 Tun Razak Cup, thus making her the first woman official to be tasked with the responsibility.

The number of teams competing in the 2021 Tun Razak Cup, which is scheduled to be held from Nov 10-20, will only be known on Monday, which is the deadline for confirmation of participation. 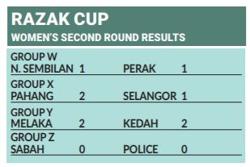 Malaysia find France too hot to handle in last eight
Malaysia will be counting on Shahrul to keep France at bay
Fight to the end
Amirul believes he will finally get his name on scoresheet against France
A big hand to keeper Che Sharul as Malaysia reach quarters
Malaysia through to Junior Hockey World Cup quarter-final
S. Africa can turn up the heat on Malaysia after Chile rout
Malaysia holds Belgium 1-1 in Junior Hockey World Cup
Young squad named for Asian Champions Trophy
It’s crunch time for Malaysia as they face rampant Belgian side