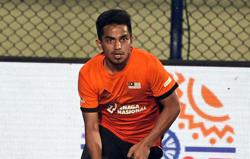 Leadership material: Police officer Razie Rahim (centre) is expected to be named skipper to replace Mohd Sukri Mutalib, who has not been called up to the national training squad.

PETALING JAYA: Old-timer Razie Rahim is the frontrunner to become the captain of the national hockey team. The 33-year-old midfielder is responsible, has good interpersonal and communication skills and even calm in challenging situations.

In fact, as a police officer, these credentials are second nature to him.

The spot as the team skipper is vacant in the absence of former captain Mohd Sukri Mutalib. He has not been included in the current 37-member training squad under coach S. Arul Selvaraj and Razie seems like the obvious choice for the skipper’s armband.

“There’s leadership in Razie. As a senior player or because he is a police officer, he is taking charge of the team. I am very happy, ” said Arul.

“Even though we have not selected anyone, he is beginning to take responsibility in our group chats and also on the field.

“It’s not just the way he communicates but from his performance in training and sparring matches, I can see he is pushing to the maximum and setting an example to others.”

Razie is one of the top players around – thanks to his ability to marshal the defence and also his prowess in penalty corners.

This year Razie scored 14 goals for Universiti Kuala Lumpur (UniKL) in the Malaysian Hockey League (MHL) and in the Razak Cup, he scored 10 goals for Police.

The Malaysian hockey team are preparing for the Asian Champions Trophy which will be held in March next year.

The centralised camp is held under strict protocols due to the conditional movement control order in the Klang Valley which is scheduled to end tomorrow.

The team will be trimmed down to the final squad of 25 by next month. 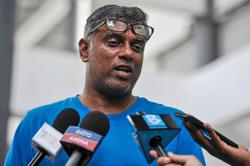 Faizal urges brother to regain spot in national team
New dates for Junior Asia Cup
With no competitions, Ashran vows to go all out in training
All’s safe and sound with constable Shafie around
Pavandip surprised to be picked over experienced players
Megat gets 18-month ban
Options still aplenty for Wallace after junior meet postponed
Coach Arul still keeps faith despite injuries to veterans
Fitri shocked but not broken
Recuperating Shahril won’t mind if he’s not picked by coach Arul