But there is no time to rest as the national gymnast will be back in training after three days to prepare for international assignments.

He took bronze in the parallel and horizontal bars, adding on to his individual all-around silver won on Saturday.

It was his best Sukma outing as he only had team silver at the 2016 Sarawak edition and failed to win any in 2018 Perak due to injuries.

“I was nervous in the final because it had been a while since I competed in all six events. The last I did was four years ago,” said Sharul.

“I was hoping for four golds, but three is good. My national teammates Chun Chen and Luqman Al-Hafiz Zulfa also did well in their respective states, kudos to them,” he said.

“Next year will be busy as I’ve to prepare for SEA Games, Asian Games and qualifying tournaments for Paris 2024,” he said.

“There is no rest after this. We need more tournaments to be better,” added Sharul, who will compete in next month’s World Cup.

He admitted that if there was one area that he needed to improve was to strengthen his upper body.

“I usually only dedicate 15 minutes for parallel and horizontal bar training because I’m not the strongest in these events,” he said.

“I’ve to change that. I want to master all six events to ensure that we’ll have a good team in next year’s SEA Games.” 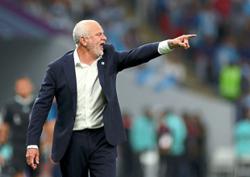