Yesterday, the 21-year-old overcame a jittery start in the vault final and finished seventh among the world’s top gymnasts with a score of 13.699.

He could have scored higher if not for a poor landing in his second jump.

Even though Sharul did not finish on the podium, reaching the final itself was a great achievement as he is the first Malaysian artistic gymnast to advance to the final since Ng Shu Wai’s appearance at the Melbourne Games in 2006.

Coach Ng Shu Liang believes the exposure would do Sharul a world of good.

“He is our new rising star but he needs more competitions to be better,” said Shu Liang.

“This is the first time that he has competed in front of a huge audience. I believe by competing with top gymnasts from England, Canada and Australia, he will grow in confidence.

“We will prepare him and his teammates for the Cambodia SEA Games and Asian Games next year,” added Shu Liang. 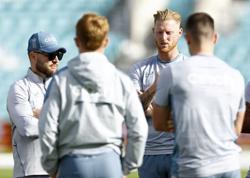