Olympics-Gymnastics-Novice Japan men's team out to prove themselves TOKYO (Reuters) - The Japanese men's gymnastics team have won either gold or silver at every Olympics since Athens in 2004 and while the current squad lack the experience of their predecessors there is no shortage of talent among this band of novices.

Three-time Olympic gold medallist Kohei Uchimura will only be taking part in the individual horizontal bar event in Tokyo but the team will still be able to draw on the 32-year-old's experience, even if they are still adapting to his absence.

Hirotaka Matsuoka, a sports marketing professor at Tokyo's Waseda University, said the team were stronger than its untried Olympic status might suggest.

"They may not have as much Olympics experience, but the level at the Japanese trials earlier this year was very high so there's a lot of good people on board," said Matsuoka.

"Just making it onto the Olympics team may actually have been quite a lot harder."

Matsuoka said Uchimura would help the team through this transition year.

"Having somebody like that with them is going to be a huge support, it doesn't matter what apparatus they're doing," he added.

Among those expected to impress is Kazuma Kaya, who was passed over for the 2016 Rio team and has been driven by that setback ever since.

The soft-spoken 24-year-old, dubbed "the man who doesn't fail" by his team mates, was a member of the team that took gold at the 2015 world championships and bronze four years later.

He topped the podium at the Japan nationals last year and finished third in 2021.

Daiki Hashimoto, 19, is also seen as a rising star after winning the 2021 Japan nationals and NHK Trophy while the most senior on the team is Wataru Tanigawa at 25.

Tanigawa was part of the teams that won bronze medals in the 2018 and 2019 world championships.

Takeru Kitazono, 18, has been nicknamed "Kohei No. 2" for winning five golds at the 2018 Youth Games in Buenos Aires, though Uchimura himself is not so keen on the moniker.

The men's gymnastics competition kicks off on Saturday with a day of qualifying. 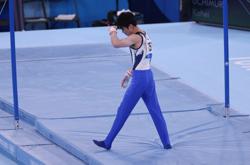