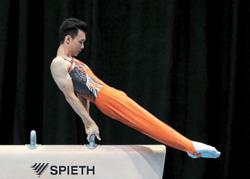 PETALING JAYA: Missing the gold medal at the 2016 Rio de Janeiro Olympics was a haunting jolt for China’s men’s gymnasts and they intend to bury the demons of their failure five years ago when the Games start in Japan on Friday.

Their gymnastics team were among the third batch of China’s Olympics shooting, tennis, taekwondo, badminton, hockey and boxing team to arrive in Tokyo on Sunday.

China, the dominant power in gymnastics at the Olympics, were a pale shadow of their great past when all they could muster were one silver and three bronzes at Rio with their men’s squad winning the bronze in the team’s all-around event.

In the 2012 London Olympics, they were all-conquering – winning five golds, four silvers and three bronzes. The men’s team were triumphant in the all-around event.

One of their athlete’s comments to China’s Xinhua news echoed the nightmare the team had to endure since their Rio debacle five years ago.

“We want to bounce back. We cannot forget what happened in Rio because we did so well in the London Olympics but fared poorly in Rio. We have trained well and made sure we don’t do a Rio repeat,” said star gymnast Xiao Ruoteng, who is eyeing the men’s team gold in Tokyo.

Russia’s dynamic duo of Nikita Nagornyy and Artur Dalaloyan will be the favourites in the men’s event.

The pair had dominated the men’s side of the sport since 2018 when Dalaloyan took the world all-around title. In 2019, Nagornyy soar to gold medals in the all-around event at the European and World Championships. The pair also helped Russia win their first World team gold medal in 2019.

And the Chinese are hoping to upset the apple cart in Tokyo. And they will be banking on 2017 world all-around champion Ruoteng and Sun Wei, who finished fifth in the all-around at the 2019 Worlds, to do it.

Malaysia’s challenge lies in the hands of Jeremiah Loo, who is looking to break his personal best of 76.5, which he recorded in the 2018 Jakarta Asian Games, but it would be tough to see him get into medal contention.