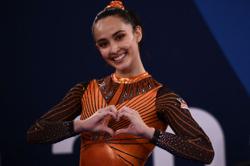 Farah: ‘I am feeling very excited and nervous too about competing, especially now, because it is so close to the Olympics.’

There were concerns that the Olympian did not have any international competition exposure before the Olympic Games in Tokyo, but she has allayed the fears by saying that the control testings at home has kept her in a competitive shape.

Over the last five weeks, the 27-year-old has been undergoing control testings with International Gymnastics Federation (FIG) judges from Malaysia via the virtual world.

“I’ll warm up as per the competition schedule and perform in front of the judges on Zoom,” said Farah, who has been without a competition since the Philippines SEA Games in 2019,” she said.

“We’ve been doing this weekly for five weeks now. This is in addition to my training and gym sessions.

“I am feeling very excited and nervous too about competing, especially now, because it is so close to the Olympics.”

Farah will be flying to Tokyo on July 17 and admits that the Olympics would be different without any spectators.

“It’s been hard preparing for this Olympics because there are so many standard operating procedures (SOPs) and requirements that we are going through and have to go through,” she said.

“Now, we’ll not have any spectators in the Games too. It’s really different but I’ll find my own motivation.”

At the Philippines SEA Games two years ago, she was the darling of the crowd whenever she took to the floor and went on to win three gold medals – in the individual all-around, floor exercise and uneven bars.

Farah qualified for the Tokyo Olympics in 2019 when she finished 59th out of 234 competitors in the individual all-around event at the World Championships in Stuttgart, Germany.