Denhollander went public with her allegations against Nassar in 2016, prompting more than 350 other women to come forward. She said Geddert had denied the survivors of his abuse justice by taking his own life.

"It is a lot to process," the 36-year-old told Reuters by telephone. "(There is a) wide range of emotions, especially grief for the survivors of Geddert directly - this really is their story and it was their justice and their day in court that they were denied by his action."

Nassar has been given two prison sentences of 40 to 125 years and 40 to 175 years in Michigan for molesting young female gymnasts and is also serving a 60-year federal term for child pornography convictions.

Denhollander, an attorney and author who consults with corporations and organisations on abuse, said USAG had not done nearly enough to ensure the safety of athletes in the future.

"They've never acknowledged the depth of the damage, and they have certainly never asked survivors, 'What can I do?' And they haven't listened when we told them - they have not taken the most basic steps," she said.

USAG, which saw its entire board resign in the wake of the Nassar scandal and offered a $215 million settlement to survivors last year, did not respond to numerous Reuters requests for comment.

"It's inexcusable that we can't deal with this in our own house," said Denhollander. "The USOPC (U.S. Olympic and Paralympic Committee) could have and should have decertified USAG years ago."

The USOPC moved to decertify USA Gymnastics as the sport's governing body in the United States in November 2018 but later suspended the proceedings after the USAG filed for Chapter 11 bankruptcy.

USOPC CEO Sarah Hirshland said in a statement on Thursday: "It's the voices of the survivors that matter most at this time. They continue to show bravery and strength in the most difficult circumstances - including today’s events."

Denhollander said she hoped those who spoke out against Geddert recognised they had made an impact.

"To know that raising their voice stopped a man from abusing and that it's helping dismantle the systems that enabled abuse and that we're going to stand together to continue doing the work that we've begun," said Denhollander.

"To know that what they said mattered, and it's important." 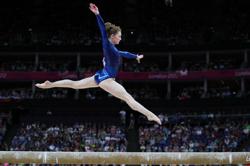