PETALING JAYA: Malaysia’s rhythmic gymnastics darling Izzah Amzan may have gone under the knife but she is determined to stay sharp to realise her dream of becoming a Commonwealth Games champion.

The 20-year-old underwent surgery for a meniscus tear on her left knee on Jan 20 but is already showing quick progress. 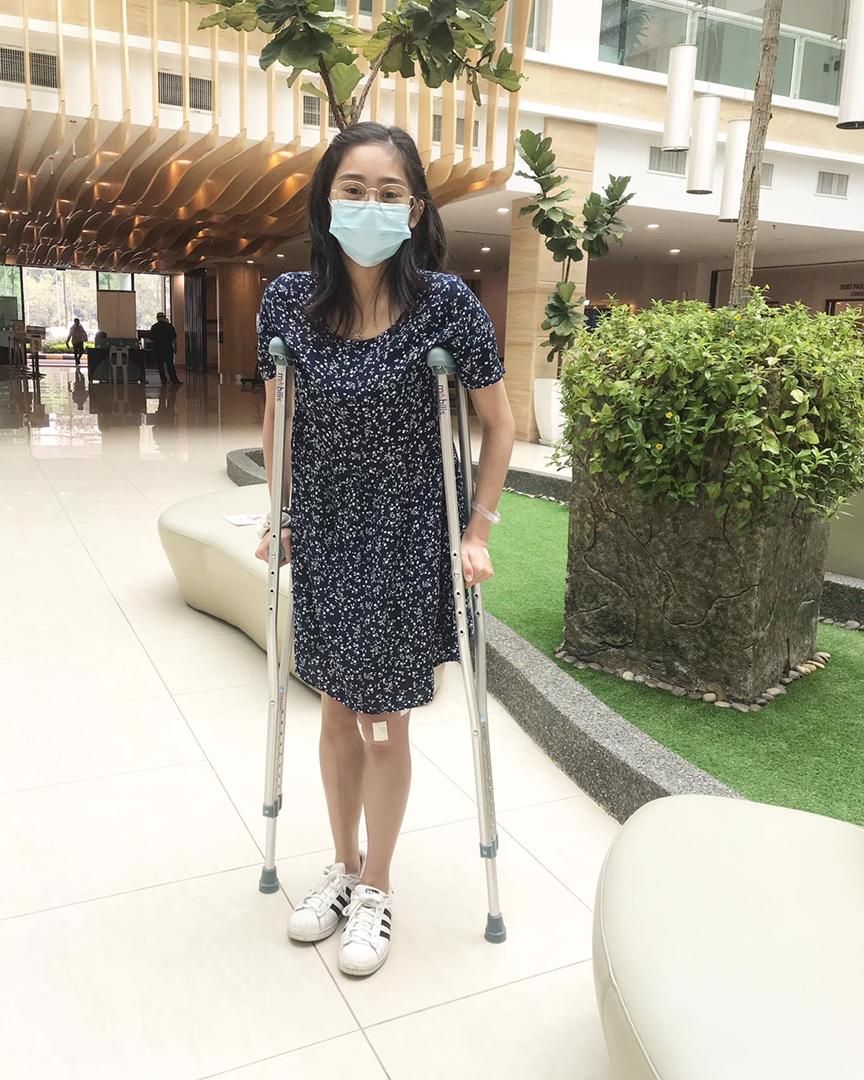 No change in Mission 2022: Rhythmic gymnast Izzah Amzan using the crutches as she leaves the hospital.

The multiple SEA Games gold medallist wants to get back on her feet so that she can dazzle her way to an individual gold medal at the 2022 Commonwealth Games in Birmingham.

She only has a team silver to show from the 2018 edition in Gold Coast.

Izzah said she decided to go for the surgery to save her career.

“It took me a month to decide whether to go for the surgery. There is always the fear of what if I can’t perform after the surgery, but I decided to look at it positively.

“The timing is perfect too as there are no competitions right now and I can take time to recover and get back.

“If I did not do it, there is also the risk of aggravating it. Anything can happen at any time and I don’t want to be stuck with an injury just before a major tournament.”

Izzah said she decided to go under the knife when the pain on her knee became bad in December last year after she had taken part in an online competition organised by the Kazakhstan Rhythmic Gymnastics.

“We’ve been without tournaments for a long time, so I guess when I got back to competitive mode last month, it affected me. It was like a rude shock to my body.

“This knee injury is not new though, as I’ve been struggling with it for some time.

“In fact, I’ve competed at the last SEA Games with the pain. I’ve just managed it, as this is expected of a gymnast... to bear whatever pain, ” said Izzah, who won two gold medals in the ball and ribbon events at the Philippines SEA Games.

Izzah admitted that it would have been easier just to quit but believed that she is made of sterner stuff and also, because she has some unfinished business to settle.

“I don’t give up easily, ” said Izzah, who is studying Teaching English as a Second Language (TESL) at Universiti Putra Malaysia.

“I’ve won golds at the SEA Games but not at the Commonwealth Games. So, this is the motivating factor for me to keep going.

For now, the pretty belle is happy with her progress, and is trying to walk at home without any help.

“I’ve been told that it will take about two months to heal before I can start light gymnasium work and rehabilitation. If all goes well, in four months, I can start training again, ” she added.

Nassar whistleblower repeats call for USAG decertification
Former U.S. Olympics coach dies by suicide after being charged
Weight off his shoulders as Jeremiah gets ready for competition
Ing Yueh wants juniors to chart own paths to success
CNY away from home is one-of-a-kind experience for Tracie
Rhythm intact as Petrina salutes SEA Games star’s determination
Gymnast Fu Jie hopes for normalcy as he misses competition
Sharul stays positive despite a string of injuries
Gymnast Izzah all pumped up for online meet
All under control for gymnasts after good response to test