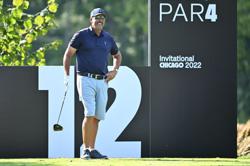 Tiger Woods and Rickie Fowler headed to the BMW Championship in Wilmington, Del., on Tuesday to attend a player meeting regarding the LIV Golf Invitational Series and its threat to the PGA Tour.

First reported by Fire Pit Collective and ESPN late Monday night, Woods was expected to "rally support around the PGA Tour" among the top players in the world who haven't already defected to LIV.

ESPN reported it would include "many" of the top 20 players in the world and other influential PGA Tour members.

It turned out that group included Fowler, who was seen leaving a plane at a Philadelphia airport with Woods and getting into a car with him to make the rest of the trip to Delaware.

A longtime fan favorite and sponsor magnet, Fowler hasn't won on tour since February 2019 and has fallen to No. 173 in the Official World Golf Ranking. He isn't competing at the BMW Championship this week because he failed to qualify for the second leg of the FedEx Cup Playoffs during last week's playoff opener, the FedEx St. Jude Championship.

Fowler has long been linked to LIV, and he confirmed the Saudi-financed circuit made him a large offer to make the jump. But in an interview published by Golfweek on Monday, Fowler indicated a willingness to stay with the PGA Tour despite its shortcomings.

"The Tour has been the best place to play, currently is and I'd like to see it continue to be," Fowler said. "But you can't expect to stay the same and be the best all the time, if that makes sense."

World No. 4 Patrick Cantlay and world No. 5 Jon Rahm of Spain were asked about the upcoming player meeting with Woods at their pre-tournament press conferences Tuesday.

"I've heard Tiger is the new commissioner, right? That's what everyone has been saying," Cantlay cracked. "I'm going to go to the meeting. I'm going to listen to what it's all about, and I'll probably have more for you after."

Rahm added that "news can be wrong sometimes" but confirmed there was a meeting, as well as a Player Advisory Council meeting. Actual PGA Tour commissioner Jay Monahan is reportedly scheduled to meet with members Wednesday. Golf-LIV golfers set to get ranking points after alliance with MENA Tour
Golf-Woods to be part of Team USA in 'some capacity' at 2023 Ryder Cup: Johnson
Golf-Fox pays tribute to 'great mate' Warne after Alfred Dunhill win
Tournament activity picks up
adidas raises awareness of sustainability and inclusivity
New Stratos golf shoe made for comfort, grip and style
How to improve your swing
Golf-Scott doesn't view LIV Series as 'pure evil' for the game
Golf series has Malaysian fans yearning for international action
Golf-PGA Tour files countersuit against LIV Golf