AL WAKRAH, Qatar (Reuters) - Uruguay give a start to veteran striker Luis Suarez and have dropped captain Diego Godin from their defence for their must-win World Cup Group H decider against Ghana on Friday.

Suarez, playing in his fourth World Cup, will be at the centre of a three-man attack with Darwin Nunez and Facundo Pellistri, who gets a start for the second time, in a match the South Americans have to win to avoid their first group stage exit since 2002.

The 35-year-old Suarez is reviled in Ghana for using his hand in the 2010 World Cup to block a Ghana stoppage-time winner in the quarter-finals. Suarez was sent off in that match, but the Africans missed the resulting spot kick and eventually lost in a penalty shootout.

Ghana, who will go through to the last 16 with a win, make two changes to the team that beat South Korea 3-2, restoring Alidu Seidu and Baba Rahman to the fullback positions they played in during the opening game against Portugal, in place of Tariq Lamptey and Gideon Mensah. 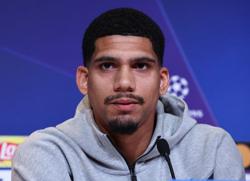