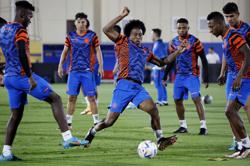 DOHA (Reuters) - Dutch striker Memphis Depay will not be rushed back into the starting line-up for the Netherlands' final Group A match against hosts Qatar, manager Louis van Gaal said on Monday.

Netherlands are joint top of the group on four points with Ecuador and the sides have identical records, so goal difference could well be needed to decide top spot.

After two defeats Qatar will be playing only for pride on Tuesday, and on paper the Dutch should win handsomely.

Asked if Barcelona forward Depay, who has recovered from a hamstring injury that sidelined him for two months prior to the World Cup but only started on the bench against Senegal or Ecuador, Van Gaal sounded a cautious tone.

"We will not take risks with Memphis Depay," Van Gaal told reporters.

"To become world champions we need Memphis so we will do anything and everything to make sure we progress to the next round because that's what it's all about.

"With Memphis I decide. It all depends on what I see. Memphis has to deliver as well."

Van Gaal said he was more than happy to continue with Vincent Jansen in attack despite questions being raised about the pedigree of the Antwerp player.

"He is a team player and in all functions of the teams he plays at a very high level," Van Gaal said.

"In my view he is ticking the boxes. I can select from several strikers and he ended up in the team because Memphis was unable to play so that's his role.

After scoring two late goals to beat Senegal, the Netherlands were fortunate to get a draw against Ecuador and Van Gaal said his team must improve from the showing.

"We made bad decisions against Ecuador," van Gaal said. "But in my view that was an exception to the rule."

Midfielder Frenkie de Jong agreed that their display against the South Americans was sub-standard.

"We weren't good enough on the ball, we didn't see the spaces," said De Jong, who has been suffering with a sore throat but is not a doubt for the Qatar match.

"We made too many technical mistakes but like the coach said I think it was a one-off."

While the Netherlands first of all need to make sure they get three points against a very limited Qatar side, making sure they finish top of the group is a major incentive.

Should Van Gaal's side finish second they would most likely face England in the last 16.

Van Gaal said he would be monitoring the score from the Ecuador-Senegal game and would "take measures" to chase goals if the situation arose.

"I think it's straightforward," Van Gaal said. "Of course I will keep tabs on the other game and I will be informed.

"But the fact of the matter is, if you want to become world champions you have to be capable to beat everyone." 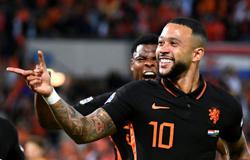