Soccer-Spirited Wales take on Iran with knockouts in sight

DOHA (Reuters) - After earning a crucial point in their opening World Cup match against the United States, Wales return to the Ahmad Bin Ali Stadium on Friday knowing that a win over Iran would put them in a strong position to reach the knockouts.

Wales drew 1-1 with the United States on Monday in their first World Cup game for 64 years after captain Gareth Bale rescued the team with a late penalty.

The Welsh are tied for second place with the United States in Group B on one point, with England leading the group with three points after thrashing bottom-placed Iran 6-2 in the opening match.

Wales' draw was a result of a change of tactics by coach Rob Page at halftime as he introduced target man Kieffer Moore, who changed the game and brought them back into the contest after they trailed in the first half.

"Lessons have been learned," Page said. "It was important we didn't lose the game.

"We have strength in depth. I can look over my shoulder to the bench and we've got players who can come on and have a real impact on games."

Wales will face a challenge against Iran, whose Portuguese coach Carlos Queiroz will expect a turnaround from his players after they limped through a heavy defeat.

Page said, however, he will have to deal with some fitness issues in his squad before Friday's game.

"Before we play Iran, the medical team will have work to do. We have players not playing week-in, week-out, they are cramping up," he said.

"We've got some tired bodies in there so we've got to get a team ready to go again on Friday."

Iran coach Queiroz will be sweating over the fitness of goalkeeper Alireza Beiranvand after he was substituted early on in their opener against England after suffering a nose injury.

Beiranvand collided horribly with his team mate Hosseini Majid as he tried to deal with a cross and spent several minutes stricken on the turf having treatment.

Iran are also dealing with issues off the field.

Fans have accused the squad of siding with a state crackdown on the unrest in Iran during which activists say more than 400 people have been killed.

But the players chose not to sing their country's anthem before their match against England in an apparent show of support for protesters back home. 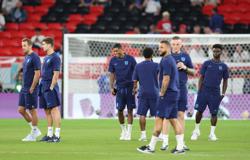