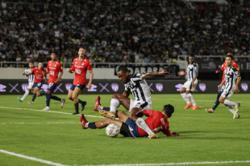 Shitembi: ‘I believe we have a strong enough side capable of turning the tie around.’ — Terengganu FC

PETALING JAYA: Terengganu need a spark to mount a massive fightback against Selangor, which could come in the form of a man known as the Dancing Shoes.

Namibian international Petrus Shitembi could be used to unlock Selangor’s defence as the Turtles look to overturn their 1-3 deficit in the second-leg Malaysia Cup semi-final at the Sultan Mizan Stadium in Gong Badak today.

And many believe the 30-year-old playmaker could make the difference despite not starting in any matches of the Malaysia Cup so far.

In the Super League, he impressed with 10 assists in 14 games this season, and he could provide the ammunition for Kpah Sherman and Tchetche Kipre to gun down the Red Giants.

And Shitembi is ready for the task.

“The preparations have been going very well, the boys are in good spirits and certainly looking forward to the match,” he said.

“My objective has not changed and that is to give the very best that I can when called upon. I’m ready.

“Selangor are obviously a strong side, they have a really good and experienced coach (Tan Cheng Hoe), and a lot of quality players ... a good blend of youth and experience.

“They’ve shown their resurgence in the last couple of games, being on an unbeaten run which unfortunately ended ours.

“It’s obviously going to be a tough task for us, given our current circumstances but I believe we have a strong enough side capable of turning the tie around.”

He says the presence of their home fans can galvanise the team in the second leg.

“They have been incredible throughout the season. I expect it to be an amazing atmosphere, and they will definitely spur the boys on tomorrow.”

Meanwhile, Selangor’s young midfielder Mukhairi Ajmal Mahadi, who was the key man in the first leg providing three assists all via corner kicks, will be expected to do the same in the second leg.

“You can expect more than three assists again. I just want to do my best,” said the 21-year-old.

“Mentally, we are in good shape because we’ve played Terengganu in the FA Cup semi-final at the Sultan Mizan Stadium, so we know what to expect. We just need to be focused and play like how we did at the Petaling Jaya Stadium last week.

“We are getting better game by game and I see this is the best chance for us to qualify for the final.” 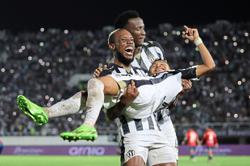