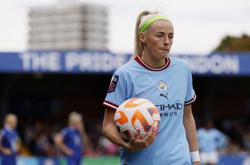 (Reuters) - England captain Leah Williamson will miss their friendlies against the U.S. on Friday and Czech Republic on Oct. 11 after sustaining an injury while training, the English Football Association said on Tuesday.

"Following assessment on an injury sustained in training, Leah Williamson will leave the England senior women's squad and return to Arsenal for her rehabilitation," the FA said in a statement.

Arsenal defender Lotte Wubben-Moy and Manchester United forward Nikita Parris, both part of this year's European Championship winning squad, have been called up to replace Williamson and Parker, while no replacement has been named for Russo.

England will return to Wembley Stadium for the first time since lifting the European Championship when they face World champions USA in front of a sold-out crowd.