MANCHESTER, England (Reuters) - Manchester City manager Pep Guardiola hailed Phil Foden as "exceptional" and said the club would like him to stay for years with the England international reportedly close to signing a new contract at the Premier League champions.

The 22-year-old, who netted his first hat-trick for City in the 6-3 demolition of neighbours Manchester United on Sunday, has emerged as a key player in midfield over the last two campaigns.

"Exceptional player, grew up a lot. He's reliable, his physical condition, so intense and clever in everything," Guardiola said on Tuesday of the youngster whose current deal runs out in 2024.

"The impact when I arrived was wow. The second he started to play important games, he doesn't feel pressure. Like Bernardo (Silva). He behaves better," Guardiola said, adding that Foden's versatility means he can play in as many as five positions.

City can move a step closer to qualifying for the Champions League last 16 with a win over Denmark's FC Copenhagen on Wednesday following victories in their opening two Group G games.

Guardiola will not take his opponents lightly despite Copenhagen, the Danish champions, languishing in sixth place in the league, a difficult start that forced them to replace manager Jess Thorup with Jacob Neestrup last month.

"Always, I see the best of the opponents. Against Dortmund and Sevilla, so aggressive. Every movement, the wingers and attacking midfielder know what to do. How aggressive with the full backs supporting," said the Spaniard.

"I don't watch the table or the position, I watch who they are as a team. My staff help me a lot to discover. In the Champions League, I have too much respect."

City top the group with six points while Copenhagen are third with one from two games.

Midfielder Rodri, who missed Sunday's game due to injury, could be in contention but right back Kyle Walker will not be involved after the Englishman was forced off in the first half against United. 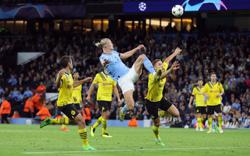