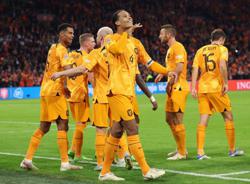 WARSAW (Reuters) - Virgil van Dijk has admitted he made a poor start to the season for his club Liverpool and said he feels a heavy burden of responsibility as captain of both club and his country, the Netherlands.

But van Dijk suggested he had turned a corner, particularly after a convincing performance for the Dutch against Poland in Warsaw on Thursday where they all but secured top place in their Nations League group, and a berth in next year’s finals, with a 2-0 win.

Van Dijk and Liverpool's performances have fallen short of expectation this season, which he admitted to reporters afterwards: “I know I could have done better in the beginning of the season. I'm not naive about that. I know very well when I make mistakes.”

He said that because of his leadership role, it meant an even more intense spotlight when he played poorly.

"I also know that I am one of the important players at the club and of course also here at the national team. I feel that responsibility,” he said.

But Van Dijk, 31, said he was pleased with the way he had dealt with the dip in form and the challenges that went with it.

“Mentally it’s a challenge. You feel a lot of pressure on your head. A lot of people forget that too, it's not easy to do that. We all try to show our best and if, in my case, you are one of the mainstays at the club, then you get the criticism you deserve. You have to deal with that and that is not always easy. But I did that just fine,” he said.

Van Dijk said he felt Liverpool had turned a corner, although they are already nine points off the pace in the Premier League with two wins from their opening six games.

"We spoke well (with each other), especially in the week leading up to the (Champions League) match against Ajax Amsterdam. It doesn't mean it can't happen again. But it is important, and I see that with the national team too, that the focus is all in the same direction. That is the basis for success,” he added. 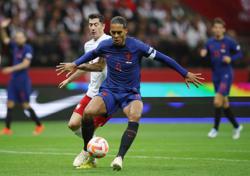 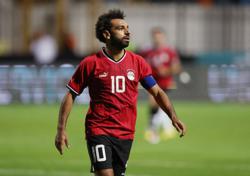