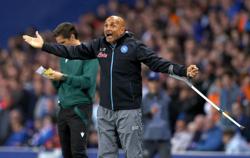 (Reuters) -A brilliant header by Napoli striker Giovanni Simeone helped his side to seal a 2-1 win at AC Milan and return to the top of the Serie A table on Sunday.

Simeone headed home in the 78th minute almost from the edge of the six-yard box following a superb Mario Rui cross.

Winger Matteo Politano had scored a penalty in the 55th minute following a foul by Sergino Dest on Khvicha Kvaratskhelia.

"In the second half we made a mistake on a couple of occasions, but overall the team has shown character and the will to win. We're happy," Napoli's assistant manager Marco Domenichini told DAZN.

Manager Luciano Spalletti had been suspended for one game after being sent off during Napoli's 1-0 home win over Spezia for getting two yellow cards.

Olivier Giroud fired in an equaliser in the 69th minute when Theo Hernandez met him with a cross in the middle of the box.

The hosts missed a series of chances in the first half. Giroud threatened to give them an early lead with a strike from the middle of the box in the 13th minute but his effort hit the woodwork after keeper Alex Meret deflected the ball.

The France international also tried to net a scissor-kick in the 25th minute, taking the ball away from team mate Davide Calabria, who was in a better position, and sending it over the bar.

Milan's Rade Krunic also came close to scoring with a header in the 28th minute but Meret again made a brilliant save.

Pierre Kalulu was well placed to score an equaliser in the 86th minute having only Meret in front of him but his shot also struck the woodwork.

"I am not satisfied and neither should the players be. If you play like that, you cannot lose. We scored only once, too little for (the chances) we created," Milan manager Stefano Pioli told DAZN.

Milan created more than twice as many chances as Napoli and had five shots on goal to their opponents' four.

"The loss was digestible but the points were very important. Against such a rival it was not easy, but we cannot be happy only because of the performance," Krunic told Sky Sport Italia.

Napoli, who have 17 points after seven games, host Torino on Oct. 1, after the international break, while Milan, fifth in the table, travel to Empoli on the same day.

Giorgio Scalvini scored in the 35th minute to earn Atalanta a 1-0 win at AS Roma on Sunday. The Bergamo-side are second in the table on 17 points, the same as Napoli.

(Reporting by Silvia Recchimuzzi in Gdansk; editing by Clare Fallon)