(Reuters) - Newcastle United manager Eddie Howe has lost all 10 of his previous meeting with Pep Guardiola including two heavy defeats last season, but believes his side must relish the challenge of facing Manchester City on Sunday.

Newcastle have begun the season in solid fashion, with four points from their opening two games, but Howe says a clash with City will be the real barometer of his team's progress.

Howe saw his side beaten 5-0 away and 4-0 at home by Guardiola's City last season -- results he said looked worse on paper than they were in reality.

"It's a good game at a really early stage of the season to see how far we've come as a team," Howe told reporters on Friday. "I think it's a challenge to be attacked and relished rather than feared."

With City again setting the pace and bolstered by the arrival of Norwegian striker Erling Haaland, a Newcastle defence that has improved beyond recognition since Howe took charge faces the ultimate test of its resilience.

Newcastle, like City, have not conceded in their opening two games against Nottingham Forest and Brighton & Hove Albion.

"I think our defenders are in a good place at the moment. I think as a team we've defended well," Howe said. "There's always room for improvement, but I think this is the ultimate test, not just as the back. We have to protect our defenders but we also have to give Manchester City a threat the other way, we can't be too passive in what we deliver."

Newcastle's summer spending has not been as extravagant as some might have imagined after their Saudi Arabia-backed takeover last year catapulted them up soccer's rich league.

Lille defender Sven Botman arrived as did England squad goalkeeper Nick Pope from Burnley while left back Matt Targett's loan from Aston Villa was made permanent.

Howe believes his squad is sufficiently strong and sounded doubtful about the chances of many more signings in the window.

"I'd love to add someone that can make us better but that is very difficult. Our search has been high and wide and far reaching," Howe said.

"But I don't expect the pool of players that we have to pick from to change between now the end of the window.

"I'm hopeful we can add a player that can make a difference. Time is running out so hopefully something will drop for us."

Howe confirmed that Ryan Fraser had recovered from a back spasm and should be fit while Targett, who also missed the game against Brighton, will be assessed. 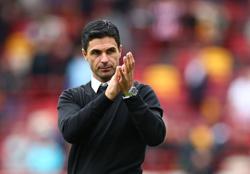