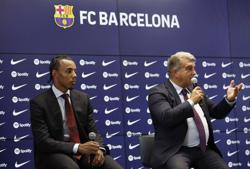 (Reuters) - Barcelona have sold a 24.5% stake in their audiovisual studio to production company Orpheus Media for 100 million euros ($102.93 million), the LaLiga club said on Friday, as they look to raise more funds to register new players.

The agreement comes after the club signed a deal with digital fan token firm Socios.com to sell off 25% of their stake in Barca Studios last month.

"With this investment the strategic partners in Barca Studios show confidence in the value of the project and the future of digital content in the world of sport," the club said in a statement.

The club have also signed the likes of Jules Kounde, Franck Kessie and Andreas Christensen among others, with Spanish media reporting that more could follow.

Barca need to meet LaLiga's salary cap to register their new signings and the new investment deals as well as the potential sale of Dutch midfielder Frenkie de Jong could get them the green light from the league.

Club chief Joan Laporta, who presided over one of Barca's most successful periods between 2003 and 2010, said in August 2021 that their debts totalled 1.35 billion euros, with 673 million owed to banks.

In June, Barca approved the sale of a minority share of their licensing and merchandising division and the cession of up to 25% of their income from LaLiga TV rights.

The club also signed a shirt and stadium sponsorship deal with Spotify in an agreement worth 280 million euros and approved financial plans in December to renovate Camp Nou, including raising an additional 1.5 billion euros in debt.

Xavi Hernandez's side will begin their LaLiga campaign at home to Rayo Vallecano on Saturday.

(Reporting by Dhruv Munjal in New Delhi and Shrivathsa Sridhar in Bengaluru; Editing by Christian Radnedge)