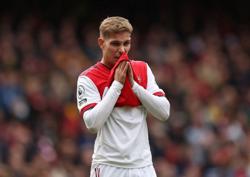 (Changes team code in slug, no change to story)

(Reuters) - Uruguay midfielder Lucas Torreira has joined Turkish Super Lig side Galatasaray on a four-year contract from Arsenal, the clubs said on Monday.

No financial details were given but the transfer is reported to be worth about five million pounds ($6.04 million).

"I'm very happy with the decision I made, it was a well-thought one," the 26-year-old Torreira told the club's TV.

"The most important thing is to try to get used to the city, also to get to know the club, my team mates. I want to train already."

Torreira joined Arsenal in July 2018 from Sampdoria and made nearly 90 appearances for the Premier League club.

He spent the last two seasons on loan - firstly at Atletico Madrid, helping them to their 2020-21 LaLiga title, and then with a return to Serie A by joining Fiorentina.

Galatasaray have also completed the signing of Belgium forward Dries Mertens until 2023, the club added on Monday.

The 35-year-old has joined the Turkish side on a free transfer after nine years at Napoli where he became the club's all-time top scorer with 148 goals in all competitions. 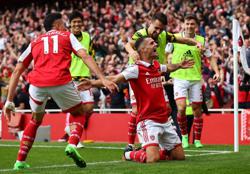