(Reuters) - England will be prepared for everything Sweden can throw at them in Tuesday's Euro 2022 semi-final at Bramall Lane in Sheffield in the hope of inspiring the nation with their bid to win the trophy for the first time, coach Sarina Wiegman said on Monday.

The Lionesses reached the last four after Georgia Stanway scored with a wonderful extra-time strike to earn them a 2-1 win over Spain last Wednesday in the quarter-finals.

"The England team is ready to play the best game tomorrow against Sweden," Wiegman told reporters.

"Hopefully we inspire the nation.

Wiegman said a "very difficult" game awaited England as Sweden, who they have not beaten at a major tournament since 1984, are well organised and very experienced.

"We are England. We have Sweden as our opponents tomorrow. They have a very strong squad, so do we. We just hope we'll play our style of game and get the win," she said.

"Everyone just has to stay focused on the game plan and, as much as they pose a threat, it's about a collective.

"Every game is a different game and they always perform at the highest level in tournaments ... They're No. 2 in the world and it'll be a really tough game."

Wiegman hoped the fans would play a big role in helping England reach the final against Germany or France, who meet on Wednesday, in the best-ever attended edition of the tournament.

"I hope the fans are going to bring us lots of energy again. We'll do that ourselves, but it really was an extra dimension they gave us in those last games," Wiegman added. 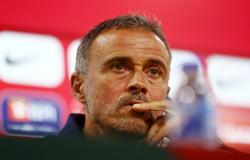