PETALING JAYA: Terengganu coach Nafuzi Zain says only a strong collective team effort can help his charges pull through against Kedah in their FA Cup second-round clash at the Sultan Mizan Stadium in Gong Badak tonight.

He admits it’s the wrong time for the Turtles to take on the high-flying Canaries, who reached the AFC Cup Asean zone semi-final by topping Group G in their qualifying campaign in Bali recently.

Nafuzi said Kedah are definitely the stronger side but hopes that his charges will be inspired by home crowd support to go the extra mile.

“What’s important is how the players perform as a team throughout the game, and the home support will also help them,’’ he said.

‘’We know Kedah’s quality and their new import players will be a handful. But we can’t just focus on two or three of their players, as they are also solid collectively.

‘’Getting a good result will depend on how my players perform as a unit.’’ 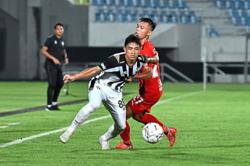