PETALING JAYA: One name stood out when Police lost narrowly 0-1 to Johor Darul Ta’zim two years ago and it was Bryan See.

The 29-year-old goalkeeper was hailed for his superb shot-stopping and brilliant catches to keep the score down.

Now, donning the colours of Melaka, Bryan is drawing inspiration from the game when the Mousedeer take on the Southern Tigers at the Hang Jebat Stadium today.

The eight-time Super League champions will go into the game as the heavy favourites as they are currently unbeaten and top the standings with 22 points from eight games.

Melaka, meanwhile, are 10th with eight points from eight games.

But Bryan believes Melaka have what it takes to spring a surprise despite the unexpected 2-3 defeat to Sarawak United at home last week.

“Our preparation has been good. We have our plan and we aim to bounce back,” said Bryan.

“That game against JDT two years ago was good but every game is important, not only against JDT but Selangor, Terengganu and others too.

“We will be missing some players as the loanees from JDT (Syazwan Andik and Fadhli Shas) will not be available but I believe those who step in will do well.’’

Against Sarawak, Bryan was caught in a controversy during the opposing team’s second goal when some said he did not do enough to stop the ball, even though Gonzalo Soto’s elbow went toward Bryan, hindering his movement.

The away side’s goal was initially not allowed due to the foul, but it was eventually given by the referee, drawing the ire of Bryan and his teammates.

“I know how to play my game. I always learn from my mistakes. One game does not define my career or life. I just want to carry on from that incident,” added Bryan.

Meanwhile, JDT coach Benjamin Mora has urged his boys to be wary of Melaka despite their erratic form.

“Melaka have been having their ups and downs.

“They started well and then, there was a gap in style and results. They are not in a good momentum at the moment,” Mora acknowledged.

“But they can be difficult at home and do have quality players. Even without Syazwan and Fadhli, Melaka will remain a strong unit.” 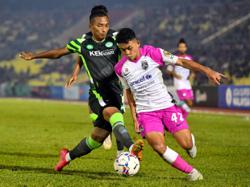