KL, Kedah fail to get winning start in AFC Cup 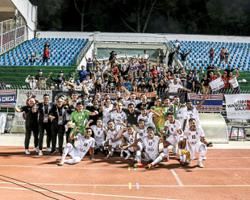 KUALA LUMPUR: Malaysia Cup champions Kuala Lumpur had their backs covered but wished they could be sharper upfront after the 0-0 draw with PSM Makassar in their AFC Cup Group H match at the Cheras Football Stadium.

Their coach Bojan Hodak lamented on what could have been after the missed chances by strikers Kevin Koubemba and Romel Morales, who saw two of his attempts hit the post on Friday.

The Croatian adopted a 3-5-2 formation against the Indonesians, and the City Boys dominated the game with captain Paulo Josue and Zhafri Yahya creating many chances for the frontmen.

“I’m always disappointed if we don’t win but a draw means both teams still have a chance to reach the knockout stage.

“We still have one more game against Tampines Rovers (June 30). I believe we can advance,’’ said Hodak.

“Defensively we did well but we have a problem in attack. That’s why we signed a striker (Jordan Mintah) for the Super League.’’

Meanwhile in Group G, Kedah were humbled by Bali United 0-2 at the Stadion Kapten I Wayan Dipta.

Kedah striker Ronald Ngah had a game to forget, scoring an own goal in the 47th minute to give the hosts the lead. Substitute Rahmat Syamsuddin Leo sealed their win in the 82nd minute.

Coach Aidil Sharin said it was a game of two halves, with Bali dominating the first and Kedah the second but two lapses of concentration cost the Canaries dearly.

“We have to be really focused in our next game against the Philippines’ Kaya (tomorrow). We still have a chance to get to the next stage and I want the boys to continue believing in themselves,” said the Singaporean.