Defender Matt Davies is already exuding good vibes after just a few days of training under the South Korean.

In fact, the Johor Darul Ta’zim (JDT) player feels that Pan-gon has endeared himself to the team who are preparing for the Asian Cup 2023 qualifying round next month.

“He has belief in us. I think he has done very well in a short space of time and I don’t feel awkward,” he said after a training session at Wisma FAM.

“Pan-gon emphasises on high intensity training which is what I’m used to at JDT, so I’m fine with that.

“There is nothing to prove; if we do our best in training, then it is going to happen on the field,” added Davies.

Davies’ JDT teammate Safawi Rasid said he was determined to assist Harimau Malaya to reprise their outstanding performance in 2019.

“I feel playing on home ground is the best opportunity for me and the team to prove something for Malaysia.

Meanwhile, Petaling Jaya City player V. Ruventhiran was proud to join the centralised training for the first time in his career to replace Negri Sembilan’s Khair Jefri Jones, who had to leave due to a knee injury.

Selangor goalkeeper Muhammad Khairulazhan Mohd Khalid said the fans’ high expectation would fire up the players when they play Brunei in a warm-up match tomorrow.

“Maybe there will be pressure but we will give our 100% and the support from the fans will also give us an edge,” he said.

The Harimau Malaya will also take on Hong Kong in another friendly on June 1, before embarking on their Asian Cup qualifying campaign at the National Stadium in Bukit Jalil here from June 8-14.

In the Group E qualifiers, Malaysia will play Turkmenistan on June 8, followed by Bahrain on June 11 and Bangladesh on June 14. — Bernama 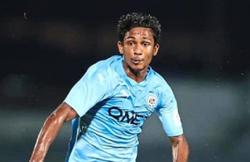