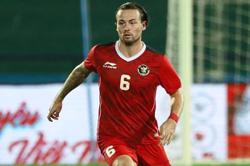 WHICH Malaysia will show up today?

That is what has left Indonesia football coach Shin Tae-yong puzzled.

The South Korean says the Malaysia Under-23 team have been ‘unpredictable’ at the SEA Games.

“Malaysia, at times, play good football. Malaysia, sometimes, do not play well. I would say they are unpredictable as a team,” he said in the pre-match press conference for the bronze medal playoff against Harimau Muda at the MyDinh Stadium in Hanoi today.

But the coach has a mini-crisis of his own to worry about. He has three players out on suspension, one injured player and one who has not even reported in.

That leaves him with only 15 players at his disposal. Wingback Firza Andika, midfielders Ricky Kambuaya and Rachmat Irianto are suspended.

Key winger Egy Maulana Vikri is also out after being injured in the 0-1 semi-final defeat to Thailand.

Another player, Elkan Baggott, has not joined the team.

Tae-yong, however, is not hitting the panic button and confidently told reporters that they would bring the bronze medal back to Jakarta.

“It will impact the team, for sure. You reminded me about Malaysia’s 1-4 defeat against us in the AFF Suzuki Cup last year.

‘‘That time, we had (Pratama) Arhan and Elkan. Now, we do not have these two.

“But we have a good process. I gave the boys a one-day break after that defeat by Thailand and gave them some motivation. I was upset with the suspensions, but we have to move on.”

Tae-yong is hopeful that two of his rising stars, Marselino Ferdinan and Ronaldo Kwateh, both 17, can make an impact against Malaysia.

Age, he said, was no factor in football if you have talent.

“I am the kind of coach who loves to give talented players an opportunity.

“I have told the boys that Malaysia is an important fixture. We do not want to go home empty-handed.

‘‘We will bring back the bronze medal to Jakarta.” 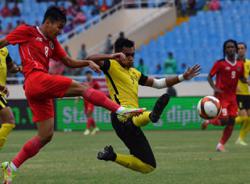