Mora: Scare a minor blip, we’ll be ready next time

One up: Bergson Da Silva (on ground) opening accounts for JDT against Pahang. — Bernama

PETALING JAYA: Eight-time Super League champions Johor Darul Ta’zim (JDT) heaved a huge sigh of relief as they got out of jail thanks to a late penalty against Pahang.

The visitors almost secured a famous win as they led 2-1 until the 88th minute when the league’s leading scorer Bergson Da Silva scored from the spot kick which ensured JDT earn a point after a thrilling 2-2 draw in front of their fans at the Sultan Ibrahim Stadium.

The Brazilian struck twice to take his tally to nine goals in six matches which crushed Pahang’s hopes of becoming the first team this season to inflict defeat on the hosts. His first goal on Wednesday came in the 17th minute.

Pahang scored theirs through Saiful Jamaluddin (18th) and a penalty converted by Argentinian playmaker Manuel Hidalgo (42nd) to at least ensure JDT will not have a runaway lead so early in the competition.

JDT coach Benjamin Mora acknowledged his team’s struggle but expressed confidence they will be more ready for the next match.

“It was a tough match for us as Pahang started well where their attacking midfielder (Hidalgo) was making some damage while their flanks were fast and skilful. It was a complex situation for us,” said the Mexican.

“We had better possession and were more effective in attack in the second half. We were not able to dish out the kind of performance we normally do and we lost most challenges.

“However, we will be ready for the next match when our players return from national team duty.”

Currently there are 14 JDT players in the 29-man training squad for the Asia Cup qualifiers.

“We are not in a position to lose points and this is a precious one and we took it. The players know how to attack but in this game, they learnt to defend. Although the back four allowed two goals, they also saved many,” said Gamel.

Gamel will use the international break to allow his players to return home as he feels family time is also crucial in regrouping the players when the league resumes on June 18. 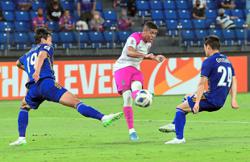