(Reuters) - Britain's Prince William offered praise and support to Jake Daniels after the Blackpool forward came out as gay, saying he hoped the groundbreaking decision would serve as an inspiration.

Daniels, 17, announced on Monday that he is gay, becoming the first active male professional soccer player in Britain to do so since the late Justin Fashanu in 1990.

"What Jake has done takes courage and will hopefully help break down barriers that have no place in our society," William wrote on Twitter on Tuesday.

"I hope his decision to speak openly gives others the confidence to do the same ... Football should be a game for everyone."

Daniels, who said he wanted to become a role model for others, has also received support from a number of current and former players, including ex-Germany international Thomas Hitzlsperger who came out in 2013 after retiring.

"Well done @Jake_Daniels11 Have a wonderful career! Great to see the support of @BlackpoolFC and @stonewalluk to make this possible," Hitzlsperger wrote on Twitter.

Former England defender Gary Neville said Daniels' announcement "will go down in history" and could help change the dressing room culture in the men's game.

"What he has done takes incredible courage," Neville said on Sky Sports' Monday Night Football programme. "In a dressing room, that would seem like the unthinkable to announce you are gay. I can't imagine how difficult that has been.

"The game has not dealt with this issue well at all... A dressing room can be an evil place, you think about the initiation ceremonies, the peer pressure and vulnerability you have. The way in which Jake spoke was absolutely incredible." 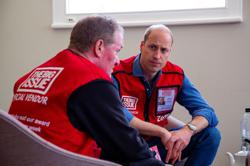