MUNICH, Germany (Reuters) - Already-qualified Bayern Munich will be without half a dozen players when they host Barcelona in their final Champions League Group E game but will still look to end their group stage with a perfect record, coach Julian Nagelsmann said on Tuesday.

The Bavarians have already qualified for the knockout stage with five wins from five matches so far and will be looking to make it six, with Barcelona, in second on seven points, needing a win to secure the second knockout stage spot.

The Spanish side will also advance with a draw on Wednesday if Benfica, who have five points, fail to beat last-placed Dynamo Kyiv.

Nagelsmann said he would need to replace Leon Goretzka and Serge Gnabry with both players nursing minor injures, while forward Eric Maxim Choupo-Moting is still feeling the effects from a bout of COVID-19.

The Bayern coach also said Joshua Kimmich -- out for four weeks after being quarantined twice due to COVID-19 -- Michael Cuisance and Marcel Sabitzer were not yet fit.

"Joshua will be tested tomorrow. But it makes no sense for tomorrow given he has been out for four weeks," Nagelsmann told a virtual news conference.

"I am happy not to have the pressure to advance because that was our first goal."

Nagelsmann said he would be using several younger players in the game to give them a chance to prove themselves but would field the strongest possible team, with top striker Robert Lewandowski not getting a rest.

"It is a worthy goal we have, to play a perfect group stage," Nagelsmann added. "Advancing with a key sixth win would be good." 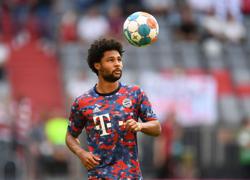