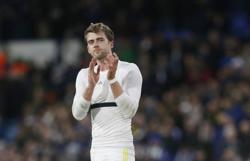 LEEDS, England (Reuters) - Leeds United striker Patrick Bamford marked his return from injury with a goal in added time as they snatched a 2-2 Premier League draw against Brentford in a high-intensity match at Elland Road on Sunday.

Making his comeback from an ankle issue, substitute Bamford fired the ball into the net off the crossbar following a corner after Brentford's Sergi Canos and Shandon Baptiste scored to give the visitors a 2-1 lead.

"I felt rusty as hell to be honest. But I always felt once I was out on the pitch I was going to get one touch," Bamford, who last played in mid-September, said.

"There was a bit of pressure but to score is always nice especially as it rescued a point.

"We had a 10-minute spell in that second half when they got the goals and it was frustrating watching it on the sidelines. It was important we got a result today, given how tight the table is at the minute."

Canos collected a pass from Bryan Mbeumo and smashed the ball past Leeds goalkeeper Illan Meslier in the 61st minute, shortly after midfielder Baptiste opened his account for Brentford with a controlled strike.

Earlier, Leeds striker Tyler Roberts netted his first of the campaign, meeting Raphinha's whipped cross with a sliding finish to give Alvaro Fernandez no chance in the Brentford goal.

Leeds lost captain Liam Cooper to a hamstring injury in the 15th minute while Kalvin Phillips was substituted after picking up a calf injury following the break, and hosts struggled to cope with their absence.

Marcelo Bielsa's Leeds were denied a second league win this week following Tuesday's 1-0 victory over Crystal Palace while Brentford, who began the season well after winning promotion, missed out on a second victory in eight games.

"Given how we got the equaliser, it's a good point but if you look at the game it's an opportunity missed," Bielsa said.

"When the game started, once we got organised, we started to dominate. But in the second half, we had issues we needed to resolve with the loss of Kalvin and we also had to accommodate his absence.

"Patrick scored a goalscorer's goal and his presence is welcome. There's nothing better than him returning with a goal." 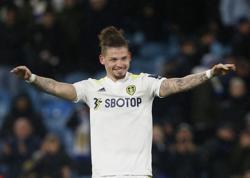