LONDON (Reuters) - Chelsea manager Thomas Tuchel said his side were making too many costly errors after they lost a roller-coaster London derby 3-2 away at West Ham United on Saturday, putting the league leaders' title challenge at risk.

The German was left fuming after Chelsea, leading 1-0, allowed West Ham back into the game when a bad back pass by Jorginho was compounded by goalkeeper Edouard Mendy failing to clear, conceding a penalty under pressure from Jarrod Bowen.

Manuel Lanzini scored from the spot, setting West Ham up for their unlikely win https://www.reuters.com/article/uk-soccer-england-whu-che-report/soccer-west-ham-stun-league-leaders-chelsea-with-3-2-win-idUKKBN2IJ0BU settled in the 87th minute by a cross-cum-shot by defender Arthur Masuaku that Mendy failed to deal with.

"We are not good enough in the details at the moment," Tuchel told reporters. "We do too many big mistakes."

"Edu is going through a rough period, I don't know why. He seems to have lost a bit of confidence," Tuchel said before adding he was not blaming the Senegal international for the loss because Jorginho's pass had left him in "an awkward situation."

The German boss said the errors were just the latest for the Blues after Jorginho was caught in possession last weekend which allowed Manchester United to claim a 1-1 draw at Stamford Bridge.

"If you do this at this kind of level you cannot expect to have a result," Tuchel added.

Adding to his worries is a growing injury list for Chelsea, who could lose their top spot later on Saturday depending on the results of their closest rivals Manchester City and Liverpool.

Tuchel said Kai Havertz was in "huge pain" after he hobbled off at the end of the first half and wing back Marcos Alonso, who replaced the injured Ben Chilwell, was feeling back pain before he was substituted.

Tuchel said he did not know when linchpin midfielders N'Golo Kante and Mateo Kovacic would be fit again while Jorginho had been playing with hip pain.

"We have overloaded players. This is not an excuse because they will stay overloaded," Tuchel said, pointing to the congested end-of-year schedule. 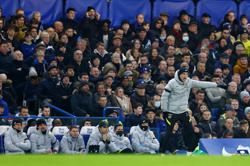