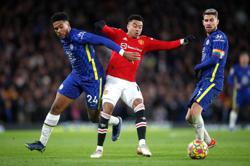 LONDON (Reuters) - Manchester United caretaker manager Michael Carrick said he was leaving Stamford Bridge disappointed after his side were pegged back by Chelsea in a 1-1 draw for his first and perhaps last Premier League game in charge.

"At the moment we're feeling a little bit frustrated and disappointed really," Carrick told reporters. "Being in front and suffering from a penalty that I don't think was a penalty is disappointment."

Jadon Sancho scored a breakaway goal in the 50th minute, setting United on course for their second win in two games under Carrick, who steered them to a 2-0 Champions League win over Villarreal in midweek after Ole Gunnar Solskjaer's sacking.

But Chelsea - who dominated the match - drew level 19 minutes later when Jorginho, who was at fault for United's opener, converted a penalty after Aaron Wan-Bissaka was adjudged to have fouled Thiago Silva.

Carrick said he did not know if he would still be in charge on Thursday when Manchester United host Arsenal or whether Ralf Rangnick, who is due to take over as interim manager until the end of the season, will have arrived at Old Trafford by then.

"As of now I haven’t got any more news for you," Carrick, a former United midfielder said. "I was purely focused on the game. I am sure I will be updated and then see what happens in the next few days."

Asked if his decision to leave Cristiano Ronaldo on the bench was something suggested by Rangnick ahead of his arrival in Manchester, Carrick was blunt: "That's not the case."