Young and restless: Adib (left) has played 18 games for Perak this season. — Photo by Perak FC

PETALING JAYA: Perak will be banking on youth power to restore their reputation in the Malaysian football league.

And a determined 22-year-old Mohd Adib Abdul Raop hopes to spark the revival.

“What happened to Perak this season has its pros and cons,” said Adib from Bagan Datuk.

Perak were relegated to the Premier League after a poor showing this season that also saw them dealing with financial woes, departure of key players and termination of four foreigners who had underperformed.

“The departure of some of the key senior players did hamper our performance, but on the bright side, the youngsters got valuable playing minutes,” said Adib.

“In the past, the youngsters would only play in the dying minutes, but this season, we had more time to show our talents and we gained experience.

“We are slowly getting the confidence to play and I believe that we can rise again. Playing in the Premier League next season will make my teammates and I more mature.

“I aim to ensure that Perak only stay in the Premier League for a season and get back to the Super League in 2023.”

“Also, I want to put the smiles back on the fans faces by getting this team to the Malaysia Cup quarter-finals,” he added.

In the ongoing Malaysia Cup, he has played the first two games – in their 0-1 defeat to Selangor and 2-2 draw with Kuching City in Group B.

Perak will take on Terengganu at the Perak Stadium in Ipoh on Oct 30. 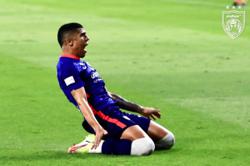