IPOH: Perak have stressed that the termination of contracts of four import players from the team on Oct 18 was due to their failure to show inspiring performances in the Super League and Malaysia Cup competitions this season.

Perak general manager Azman Noh said the decision was not made arbitrarily but collectively after detailed discussions by the management with the team’s coaching line-up.

“I admit import players are important for the team if they can contribute. But I feel it is better that we give an opportunity to the local players to be in action if the import players’ performances are not up to expectations,” said Azman.

“To me, the termination of contracts of all these four import players also saves money especially in facing the remainder of the Malaysia Cup (competition),” he said after a friendly match between Perak and Kedah at the Perak Stadium on Wednesday.

In addition, Azman said Perak hoped the existing players would stay focused and continue to strive to achieve the target of at least qualifying for the quarter-finals of the Malaysia Cup.

“I concede it is difficult (quarter-finals) especially when we have a line-up of young and inexperienced players but I am confident with their spirit and determination, we can create a surprise,” he said.

Their next match is against Terengganu on Oct 30. — Bernama. 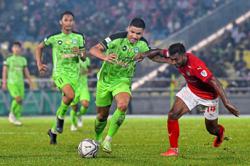