BERLIN (Reuters) - Borussia Dortmund's mental strength has been an issue for some seasons now and Tuesday's 4-0 Champions League demolition by Ajax Amsterdam brought it back into focus with coach Marco Rose demanding a tougher mentality from his players.

They looked to have given up the game at 2-0 down against Ajax and never put up a fight after that for their biggest loss in the competition.

With Arminia Bielefeld awaiting in the Bundesliga on Saturday, Dortmund must find the switch to turn things around.

"We have to continue this process, to improve the issue of body language," Rose said. "But we have to do it together, as a team. Then such a defeat can also have a positive effect.

That effect must, however, come soon because if Dortmund, without a league title since 2012, are to challenge Bayern for the Bundesliga this season then they have to show consistency.

In past seasons Dortmund have led the title race until about the halfway mark but have often faded in the second half of the campaign, raising doubts about the team's winning mentality.

The Bavarians, gunning for a 10th straight league title, are doing it much better, having crushed Bayer Leverkusen 5-1 last week before firing another four goals past Benfica Lisbon in the Champions League on Wednesday.

"In Munich when something like that happens (and Bayern fall behind) then Joshua Kimmich doesn't just give up, then he gets really angry. Then there is fire and that is maybe the difference," Rose said of his players' body language. "The question is always how do you tackle it. How do you react.

"We have to be critical and continue to work very hard so that we can win such games."

Rose, in his first season at Dortmund, will be counting on top scorer Erling Haaland to drag them back onto the winning track and the Norwegian could become the youngest and fastest player to reach 50 league goals if he scores on Saturday in what will be his 50th Bundesliga match.

Dortmund are in second place in the Bundesliga on 18 points, with leaders Bayern, who host Hoffenheim, on 19. 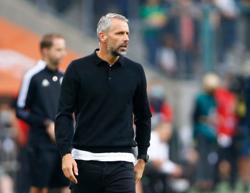