(Reuters) - The National Women's Soccer League (NWSL) has agreed in principle on how to handle the changes that are being demanded by players after allegations of sexual misconduct engulfed the league, interim CEO Marla Messing said on Wednesday.

The report sent shockwaves through the NWSL, leading to the departure of former Commissioner Lisa Baird and appointment of Messing. U.S. Soccer and FIFA also announced they would investigate.

"I am committed to achieving institutional change on behalf of the players and everyone else associated with this league," Messing told reporters.

She added that the league and NWSLPA will "collaborate" on a single investigation.

Messing, a former executive with Major League Soccer (MLS), declined to say whether she would pursue a permanent role with the league. She said that she was focused on immediate reform ahead of the NWSL's 10-year anniversary next year.

"We have to make the changes that are fundamental to having a league where players feel valued and safe and feel like they are receiving the respect that they deserve," she said.

Athletic said Riley has denied "the majority" of the allegations. 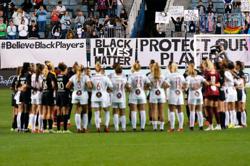