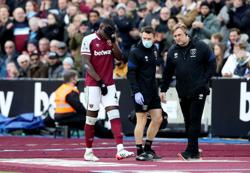 The visitors struggled to create clearcut chances at Goodison Park with Everton aiming to move into the top four with a draw on Merseyside, but Ogbonna's goal secured a vital three points for West Ham manager David Moyes against his former club.

"It was a good performance and this is a difficult place to come, as I know," Moyes said. "(The goal) was one which we needed because we'd been knocking at the door in different ways, so we needed that to get over the line.

"I think overall we deserved it because of the way we played, we played some really good stuff. We had a lot of the ball, but maybe in the final third we could have been a bit cleaner."

Neither side carved out any real chances in a cagey opening 45 minutes, with Alex Iwobi's air shot going down as Everton's best opening, before England stopper Jordan Pickford kept out Jarrod Bowen at the other end.

The Blues did look to increase the tempo after the restart with Iwobi's close-range effort bravely blocked by Ogbonna and Salomon Rondon flicking a header just wide of the post.

West Ham made them pay with 15 minutes left when Ogbonna got above Ben Godfrey to nod home Bowen's whipped corner.

Rafa Benitez's side tried to rouse themselves in the final minutes, with substitute Anthony Gordon thrown on in search of an equaliser, but the visitors hung on to secure back to back Premier League wins at Everton.

"We played against a good team, they are big and strong and have quality and pace," Benitez said. "We were fine on the counter attack but we were missing that final pass.

"We can talk about the corner, it wasn't a corner for me, you have to protect your keeper in the six-yard box and it's something that is difficult to understand in England because that is why you have the six-yard box -- to ensure the keeper is more protected.

"Anyway it was a corner, we conceded and after that we have to be better on the ball. The reaction was there but when you play against a very good team, that is well organised, you have to be more precise and we were not." 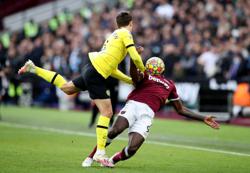